This is ME in the Sea!

"Cackle TV produces award winning seakayaking and adventure films which are available for purchase on DVD. The company was set up in 2001 by Justine Curgenven to combine her professional television background with her love of kayaking and the outdoors. Justine has successfully pioneered a new genre in seakayaking films – the inspirational ‘This is the Sea’ series features talented paddlers, some of the world’s most beautiful paddling destinations and cutting edge expeditions. The films are shot with a kayak mounted camera system which captures warts-and-all action in the most challenging rough water. Justine’s films have been shown on the National Geographic Channel & BBC Wales, and have won awards at prestigious film festivals such as Banff Mountain Film Festival and Kendal Mountain Film Festival. In 2010 she released her first open boating DVD “This is Canoeing” which has been called the best ever collection of open canoeing films. Her aim – through films and her website – is to inspire everyone to escape from everyday life, and get out on the water."
So what's next?
Get ready folks...the 5th installment of the award winning film series, "This is the Sea" is in production now.  I was lucky enough to be asked to do some filming with Justine just after the storm gathering.  We had a great time working together and I can't wait to see what else she has come up with for This is the Sea 5!!!
Her and Barry Shaw were such gracious hosts and showed me such a great time during my visit.  Justine and I went out for a couple of really fun paddling / film sessions around Anglesey.  We went for a super stormy surf session at Cable Bay the first day, then squeezed in another day of filming before I headed North to Scotland for some whitewater boating this week.
I got a chance to hit up The Swellies Wave in the Menai Straits of N. Wales with her and Barry, then we cruised up the hill to do an interview.  Be on the look out for her next flick.  From what I can gather, it's going to be another classic.  Some huge expeditions, a few laughs and a lot of sick boating.  Check out a few images for the shoot below and be sure to visit her website http://www.cackletv.com to see the rest of her work. 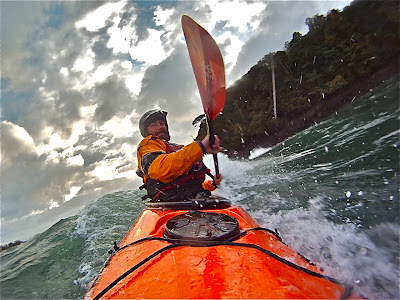