I made it to Anglesey!

It was quite a journey, but I've made it all the way to Holyhead Wales in preparation for The Storm Gathering.  My flight left around noon on Wednesday from Portland.  Things went surprisingly smooth even with my "wind surfer" with me.  (No kayaks allowed on planes you know?)  I wasn't sure they would take it, so I put on an extra big smile and cheery disposition.  I wrapped my Pyranha Burn up tight in black felt and hoped for the best.  They charged me the expected $150 and I was on my way.  No questions asked.    The first leg of my trip took me to Atlanta, Georgia then onto Dublin.
When I hit the ground in Dublin I cruised through immigration, picked up my two oversized bags and ventured out into the world to find a bus.  No easy task when you have a backpack, a huge golf bag, and a kayak.  As I began to board, the bus driver shot me a look of disbelief.  I asked if he had any suggestions.  He replied in his thick Irish accent, "I suggest you get that thing on the bus if you wish to take it with you."  I wrestled it aboard and we were off to the City Center in no time.  From there I listened for the driver to call out my stop, but managed to miss pushing the stop button in time.  That's ok, it gave me a chance to stroll the streets of Dublin.
The looks the locals in Dublin gave me were precious memories in the making.  Everyone was SO nice.  Several total strangers stopped and offered to help me find my way.  When I found the central bus station, I waddled inside to figured out where to pick up my next bus.  That bus took me to the Ferry Port and the ferry would take me to Holyhead.


Upon arrival I wasn't sure who would pick me up.  With no phone number to call and no mobile (that's of course a cell phone for you fellow Yanks;) I was left with little options.  I sat myself down and logged on to the free wifi in the terminal and e-mailed Mark Tozer, The Storm Gathering organizer.  He shot back a quick e-mail and re-assured me that his friend Jim would be by to "fetch me".  In no time he was there and we made our way to the Anglesey Sports Center where the gathering would happen. (By way of the pub of course). 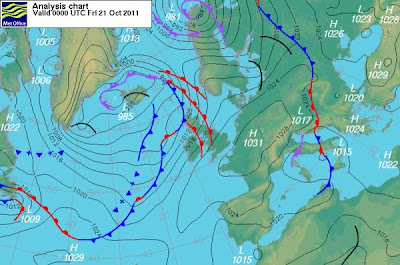 The wind whistled around the Anglesey Sea Center all night as we slept.  It’s only fitting that an intense storm is on the way for this event.  For those that know how to read the surface pressure forecast above…you can see that we are set to have some wicked South and SW winds as that low comes across Ireland and the rest of the UK.  By Sunday things should be properly HUGE.
Before everyone arrived to the gathering and before the winds build we went out for a short paddle.  I showed up early to pick up my loaner Tide Race Extreme  and some other pieces of gear from the local premier shop called Summit to Sea.  I packed most of my own kit, but I was forced to borrow a PFD and skirt to complete my ensemble.   Hopefully my sponsors will take pity on me and show me forgiveness for temporarily straying out of necessity. 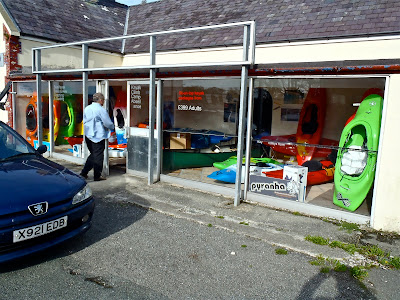 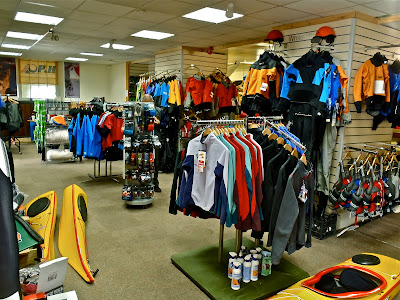 Local expert and guide book author Jim Krawiecki showed me around.  We went to the North to hide from the wind.  We put in at Bull Bay and paddled over to an old deserted brick works facility called Porth Wen Brickworks. Here between 1850 and1914, silica ore was mined by hand from open cast pits.  What’s left behind is beautiful dome shaped kilns and a towering smoke stack along with massive brick buildings that are slowing eroding into the sea.  In it’s prime, this place would have been a buzz with activity with ships coming and going from the working port.  It was really fun exploring the ruins.  It’s a great place to duck out of the south wind as well. 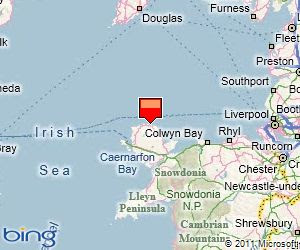 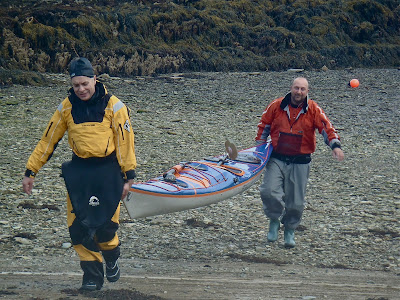 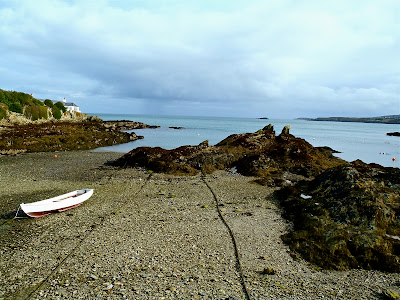 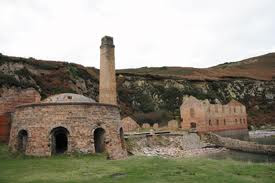 We had a good time poking around the rocks and seeing the sights.   I think I’m going to like this place!  I can hardly wait for The Storm Gathering to begin!!
Posted by Paul Kuthe at 2:00 PM