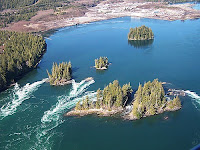 "The Butze"(but-zee) is not one wave but many separate features or "hydrolics" including big whirl-pools, pourovers, and breaking waves that form and then dissapear as 30+ feet of tide water squeezes back and forth through narrow channels between the densely packed cedar covered islands laced across Fenn Passage.

Fenn separates the city of Prince Rupert on Kaien Island from mainland Canada in Northern B.C.  "Kaien" meant "frothing water" to local natives; we slept at three ferry terminals, traveled over 2000 miles and sat aboard a ferry for 15 hours to find out why.

The plan was to get never before seen sea kayaking footage for Bryan Smith and Reel Water Production's latest project for Outside Magazine while enjoying the exploration of a possible new surfing zone with a solid crew of good friends.  We needed to get in there and camp on one of the islands that form the rapids.  This would provide the easiest staging point to film and shoot photos of the crew paddling and surfing the rapids throughout the entire tide cycle...both ebb AND flood for the next week.

We loaded up expedition style and were prepared for the extended stay in the B.C. bush.  A short distance from Prince Rupert, the rapids had been well known to local whitewater boaters for years, but was relatively unexplored by "sea kayakers" until now.

“These are dangerous and spectacular rapids...Small craft with local knowledge may pass through at high-water slack. Morse Basin 18 to 300 feet only available to small craft with local knowledge at high-water slack proceeding from the northward through Butze Rapids. Tidal currents flow in and out of Morse Basin through Butze Rapids in the north and from Zanardi rapids through Wainwright Basin and Galloway Rapids in the south. The flows through Butze and Zanardi Rapids are violent during larger tides, except near time of change.”

"Spectacular AND violent..."  Just what anyone wants hear when in search of a few of the biggest tidal rapids in the world.  We just hoped we would find something that was surfable in the long boats.

To see what we found, you will have to stay tuned.  Bryan Smith is working on a big WebTV project for Outside Magazine sponsored by Arcteryx called "The Season."  There is also an upcoming Canoe &Kayak Magazine photo essay by Phil Tifo due out soon.

See some amazing quality HD footage from "The Butze" and the rest of Prince Rupert during Bryan's presentation at this years West Coast Sea Kayak Symposium in Port Townsend, Wa.  later this month.

For now...here are a few preview shots to drool over... 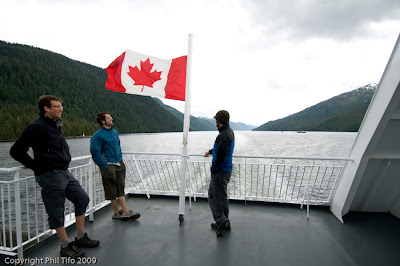 Nick Jacob, Dave White, Paul Kuthe on the ferry up to Rupert
photo by Phil Tifo 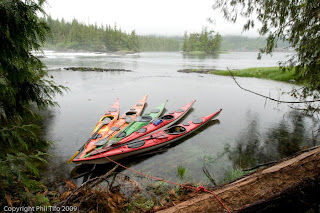 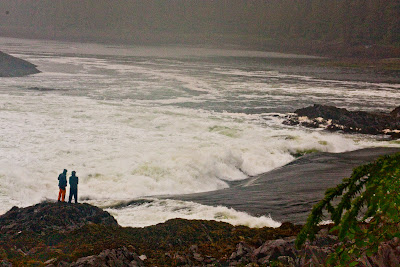 Our first morning we awoke to the unmistakable roar of the big ebb.  When I think of the Butze, this is what comes to mind 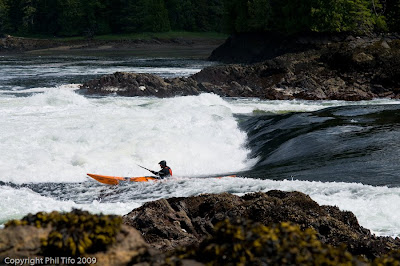 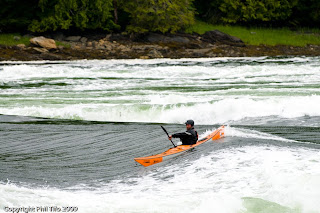 Surfing the flood...
photo by Phil Tifo
Posted by Paul Kuthe at 6:45 PM No comments:

It's been way too long since I made a post. Things have been slammin at the shop. While I HAVE managed to get out boating...I have not made time to share with all of you.

Look for Updates soon about everything I have been up to. It's been a busy season...

I have been on a couple B.C. trips for Bryan Smith's latest project called "The Season." (Due out next Spring) I have made a couple appearances in some ads from Thule Rack systems and even a Tampax tampon ad!! I did some volunteering with First Descents . As well, as many local events.

I have also ended up in a couple magazines recently. Adventure Kayak magazine has a biographical article featuring yours truly out right now. Just click the link to read it!!

Also, Be sure to look out for the upcoming Canoe & Kayak Magazine photo essay featuring our recent trip to Prince Rupert, B.C.


With all that going on, there is still one stand out accomplishment I must share with you...


I am lucky enough to have ended up in the world famous N.Y. Times!!!!!

Click the link to read the article. This is the photo they used. The article is about dam removal. 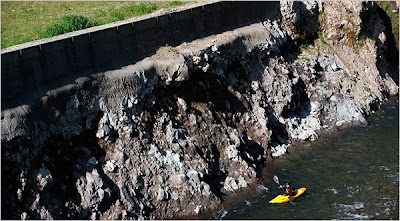 Sorry for the absence. I will try to get another post up asap. Thanks for reading!

Posted by Paul Kuthe at 4:28 PM No comments: