White noise and thunderous boofs rained down filling the air at Sunset Falls with a fine mist all weekend as racer after racer stomped their landings and pulled toward the finish with everything they had.  While kickin back with marinated tri-tip served up by Next Adventure and reminiscing under the shaded cover of the Alder Creek event tent Saturday evening, I began to realize I wasn’t just experiencing another race.  No…this was something more; something bigger than any one event or shop could ever be. I was witnessing a family reunion.  The Northwest Creeking Competition is much more than just a race in our region.  It's a chance to come together as a community to celebrate not just the river, but the lifestyle it provides. 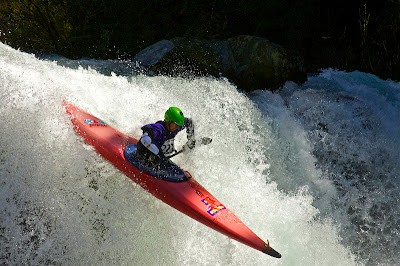 The Northwest Creek Comp has taken many twists and turns through its long history.  Before the Oregon Cup, there was only the Bob’s Hole Rodeo. Back in the 80’s the whole thing started primarily as a long boat ender contest (using the shortest boats on the market at the time of course). As boat design evolved so did the contest. Big enders were replaced by endless spins and cartwheels before boats truly took flight with aerial acrobatics.  By the mid 90’s the rodeo circuit was running at full steam with a traveling road show. Eclectic boater teams wandered like nomads from festival to festival in pursuit of sponsorship, fame, and bragging rights; not to mention free beer, food, and camping whenever it could be had.

The increased notoriety and blossoming marketing budget of the Oregon Cup allowed for an opportunity to make a difference for the entire Northwest paddling community.  With impending hydro power projects looming The "Canyon Creek Extreme Race" increased awareness in the community while pushing the sport of down river creek racing to new levels. Boater-cross events and surf comps were soon added, creating what was to become The Oregon Cup in all its former glory.

By the time Keith Jensen laid the event in my lap during my first season at Alder Creek Kayak & Canoe in 2003 freestyle kayaking seemed to be terminally stuck in the same "retentive" hole. “The whole rodeo circuit imploded for multiple reason” explains Dave Slover, owner of Alder Creek and an original founder of the Oregon Cup in the early 90's. “Consolidation in paddlesports manufacturing reduced brand competition and sponsored whitewater paddler numbers dwindled..." Slover explains.  The economy was slow and gasoline prices soared.  Suddenly the nomadic tribes numbers dwindled to a few familiar faces while subjective and nuanced peer judging had limited any potential to reach a mainstream market.  As creeking became more popular it was “somewhat easier to be a high level creeker than a pro rodeo star,” Says Slover. In 2005, High water shifted something in the river bed, forever changing Bob's hole itself and officially ending the widely celebrated play boating era in the Northwest.


Increased event costs, dwindling participation and decreasing sponsorship spelled the end for the Oregon Cup and was threatening to take the Canyon Creek Race down with it.  The Canyon Creek Extreme Race was as good as dead until Luke Spencer of Next Adventure, OKCC members, and I came together for a meeting with other passionate community members to discuss the future of the race.  We needed a plan. We found what we were looking for at the very roots of what made the original race great.  It was time to return to local paddlers enjoying a competition on local waterways; not for fame or fortune, but purely for the enjoyment of boating hard with good friends in a beautiful place we all love.

Things were looking good until 2009 when a MASSIVE landslide caused by clear cutting upstream, clogged the narrow canyon above the race course on Canyon Creek, Washington.  Upon hearing the rumors, crews of local boaters descended into the canyon to investigate the effects of the  jam up close and personal. Check out my blog post showing more of the first images that confirmed our worst fears. The slide ended not only the running of the race, but ruined a classic and beloved run frequented by the entire NW paddling community.  Despite all the efforts to ward off a man made dam on Canyon Creek all those years, mother nature managed to dam up the river in a matter of minutes.


We were forced to move the race to nearby East Fork Lewis River, much to the delight of local paddling legend Mike Olson who lives along it's twisting bank.  "Oly" has long been an advocate and host of the event, literally making competitors and spectators feel right at home in his own back yard and paving the way with the locals to access the river.  Mother nature giveth and she taketh away.  Just as fast as flood waters filled Canyon Creek with wood, she returned to flush it clean again a year later... 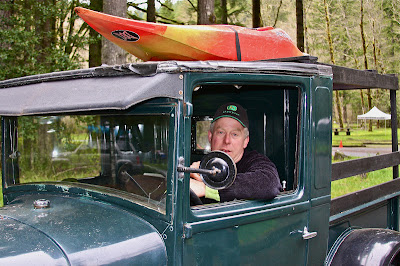 "Today the NWCC is a thriving 2 day event and one of the biggest races in the country!        The event boasts 2 amazing race courses on both the E.F. Lewis R. and Canyon Creek. The event headquarters is set at scenic Sunset Falls Campground where participants can enjoy a great view of racers negotiating beautiful Sunset Falls, enjoy a great BBQ, music, and share stories of the river. Day two competitors head over to Canyon Creek to challenge themselves on one of the best creek courses in the nation!" - Luke Spencer. 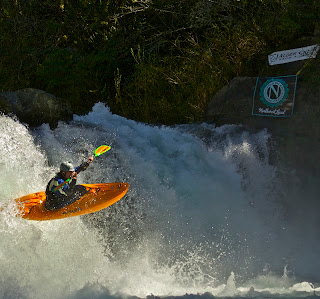 This year's race marked a new era.  For one, Tao Berman did not sweep the entire event, but more importantly, the festival and competition was bigger and better than ever, with two full days of bright sunshine and quality creek racing on two world class courses!  The free camping was all snapped up by Friday night and the party...oops I mean race...was ON! 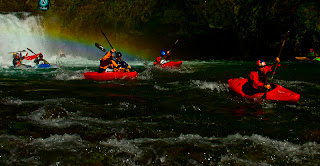 We woke the next morning to wall to wall sunshine, rising temperatures with a near perfect water level.  There was plenty of excitement for the dedicated and determined on river support crew Saturday.  It's one thing to stay on line for a few rapids at a time with the occasional break, but pulling your guts out above every tall horizon line, through every deep hole, and swirly run out really takes it's tole, testing even the best paddler's skill and endurance. 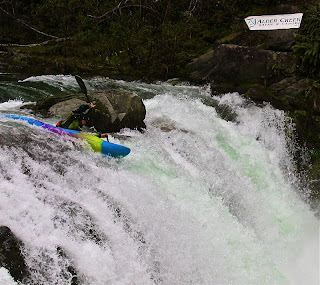 Rafts, Inflatable Kayaks, hardshell kayaks, and long boats all charged down the course.  Even some classic Topolino Duos were seen givin er' over the falls with varied success.  Races were mostly run as individual heats, but the crowd pleaser is always the mass start where all the racers meet head to head as they come bounding over the falls as a mass of flailing elbows, blades, and boats.  Darren Albright was the big winner sweeping the event on Saturday winning Long Boat, Short Boat, and The Mass Start.  Official Results will be posted at NWCC soon.


I had a great time racing both days.  I certainly don't train for this type of paddling, and am always humbled by those that do.  Due to issues beyond the control of seasoned veteran race timer and volunteer Jim Virgin, there were some issues with timing at the finish line but it's not about that for me.  That feeling that comes boiling up from the pit of your stomach as the starter begins the count down from "ten...nine...eight...seven..."  The sense of relief and accomplishment after a smooth run is in the books.  I love the whole atmosphere that spirited yet friendly competition brings.  Even some of the best paddlers express some feelings of anxiety and even nervousness as they line up at the start, but it all melts away as you hear the starter's voice ring out "three...two...one...START!"


Nothing feels quite like flying down a demanding section of river as friends cheer you on from all sides.  The abrupt folds and protrusions of the canyon walls blur into a smooth grey twisting corridor leading you ever deeper into the gorge.  The cheering fades into the background as the sound of the last rapid fades just for a moment before the next rapid begins to echo up through the gorge and then there it is...  The last crux rapid presents itself as a defiant and ever vigilant guardian of the illusive finish line.  As I flew over the last boat eating hole and pulled towards the line I couldn't help but smile.  I had two good runs, but more importantly we managed to pull off an amazing event once again.


A big thanks goes out to all the sponsors of this year's event.  It takes months of hard work and lots of planning from the event staff, but none of it would be possible without companies like Next Adventure and Alder Creek Kayak & Canoe stepping up to make this community run, grass roots event possible year after year.  I'm already looking forward to next year's "family reunion."  Hope ya'll can make it in 2013!


For more information, a great video, and official results from day 1visit:
The Exploring Elements Blog brought to you by Bryon Dorr.